I really debated over whether this article about debunking 'Avatar' was even worth writing, so long now after the movies release. But the other day a co-worker came to me and said that she'd just seen the video and it made her think of me. She thought that movie has a strong spiritual message, and I'm a strongly spiritual person, so that makes sense. However, I personally would rather NOT be identified with this movie in any way, shape or form, as I was greatly offended by it. Let's chat about why.
See, while lots of people took in the excellent effects (ie. the flying sequences and the pretty lights glowing whenever the people of Pandora take a step on the soft night earth), I looked far deeper and recognized a very disturbing message that practically screamed, "One cannot be a 'real man' if one's legs don't work. One cannot be a fulfilled human being as a paraplegic. Escape this awful fate...slip into a fantasy world where you can be strong, thin, and beautiful -everything is better there. You are nothing as you are...just a wasted body." I believe the name "Meals on Wheels" was actually used by the other jugheads in reference to Jake. How do think this made anybody with a physical disability feel?
Think about it. Why did the lead character make the choices he did...to sell out an entire peoples to the military? To betray them as he did and have the only home they'd always known destroyed? He'd been promised a new pair of legs, is why.  But this is not my only problem with this movie...there were so many  negative messages disguised within it.

Take for instance the two lead female characters. They were totally awesome, right? Strong, intelligent, fearless women who are making important contributions to their communities as leaders. Women to be revered and respected.  Yet Dr.Grace Augustine (Sigourney Weaver) is completely chastised and found to be very unattractive and annoying to her comrades in arms; they're suspicious of her intelligence and she's only accepted when doing the military's true bidding...working towards raping the planet Pandora of it's natural resource 'Unobtanium' (how American....). And let's face it, she's portrayed as being simply too old to be sexy, as per Hollywood's standards. A totally disposable character. 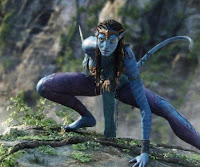 Neytiri, on the other hand, is portrayed as being tremendously sexy, sleek and cat like. Fierce and agile, an independent women who doesn't take any shit...but the lead character, coerced into being a spy, stills manages to fuck her before he, well, fucks her and her entire community, pardon the pun. At one point in the movie she becomes utterly submissive and, while looking demurely towards the ground, tells Jake that, since he's been accepted into the tribe, he gets to choose a wife (who will it be, we all wonder? Duh). This is the woman who's taught him everything there is to know about fitting in, and suddenly he gets to claim her as his own? Bullshit...I smell total bullshit. 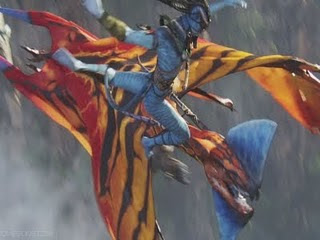 But, Kim, the people of Pandora themselves, the Na'vi, were so connected to the land, to the animals, to their ancestors...surely you can't find fault with that? Well, actually, I can. Didn't it strike you as just a wee bit violent, the way that they capture and bond with the direhorse or the flying mountain banshee's? When Jake connected to the banshee by plugging into it with his braid the poor things expression made me feel like I was watching Deliverance, for goodness' sake! It's eyes nearly bulged out of it's head and it went ballistic! What's sacred about that?!?
As far as I'm concerned this movie doesn't do anything to promote a true sense of spirituality or an authentic connection with Nature, despite the fact that some scenes were very pretty. Look beyond the facade (millions of dollars worth of facade) and try to see what I saw...a man with poor self confidence due to societal stigma gains the trust of a "savage" peoples,  betrays them, dupes the woman he supposedly loves and causes their Hometree to be destroyed and their leader (his lovers' parent, no less) murdered. And yet he's the "chosen one"? (The Toruc deems it so, you know). In the end he gets to shed that broken body of his, move permanently into his Avatar and into the lives of the Na'vi and for what? True love? Yeah, right, try again.
This movie has "white male privilege" written all over it. Plus war, war and more war...I see you, James Cameron, and I see some serious ugliness under the veneer of your magical, fantastical world.

After reading this, what do you think? Will you be handing your hard earned money over to the theatres to see part two?  I'd love to hear your opinion about the movie, though I know it's past the hype. If you loved it, share it, it's all good. If you've got critical thoughts, share those, too. Thanks for stopping in.
Posted by Kimberly at 12:31 PM No comments:

I've been feeling really concerned for the state of Ontario's capital city since the G20 passed through. As was perhaps your experience, my Facebook home page has been riddled with YouTube videos and News clips about police and protester related violence posted by concerned friends for the past week. Sorting through all of the chaos can be overwhelming and exhausting. What's true? What's false? Who can you believe if you weren't there? How do I feel about what I'm seeing and hearing? What does my intuition say about the whole situation?

I'm not an extremely politically motivated individual and I mostly try to stay away from watching major news networks because, quite simply, I don't trust that I'm seeing/hearing the whole story every time. The same can hold true for personal recordings posted to YouTube by the public. One must be critical when forming an opinion around such a big issue. However, I did do some digging and came up with some pretty disturbing stuff. Whether any of it is true or not is not up to me to decide. That's the importance of holding a public inquiry into the actions of the police during the fiasco called the G20 Summit.
Take for instance this video of Amy Miller who claims that she was detained by police after witnessing the police searching a group of young people. She says she was put in a cell for 13 hours with 25 other young women and was threatened with rape and 'gang-banging' by the police. She spoke with women in her cell who had been strip-searched by male officers...one woman told Amy that the officer has inserted his finger into her vagina. Nasty. This video shows peaceful protesters being shot at by police with rubber bullets for singing the National Anthem, for crying out loud. And this link is almost unbelievable in it's surrealness...an amputee's prosthetic leg ripped off and tossed away, and him dragged on the ground by police in front of his daughters. And this happened in the so-called safe protest zone!

And that whole Black Block scenario...I've no idea what to think...The vandalism, the burning car...no police presence for an hour and a half while it all goes down?!? Watch the video above and ask youself if that wasn't the work of paid provocateurs. I feel that a few broken windows, in the big scheme of things, is really a small act. After all, a billion dollars went into security...they've got the spare change it'll cost to replace a few windows. Insurance can take care of the rest.
Having said that, I don't think all cops are bad. I get that they're people, too, and just trying to do their jobs. Shit rolls downhill, so to speak, and I don't doubt that the majority of police actions were sanctioned by governance higher up. However, I do think ALL INDIVIDUALS, whether they're a member of the Ministry, a cop, or a rioter, are accountable for their actions and should be brought forward to serve justice for any actions that caused severe physical or psychological damage to another. It's what we'd demand for anyone who was to sexually assault, beat, threaten, gas, or shoot rubber bullets at ourselves or someone we love.

After being sent this local link by a good friend, I knew I had to take the next step and attend the Guelph Family Friendly Rally and Testimonial Reading being held at City Hall on the evening of July 5th...it's what I'd been asking for: to walk my talk within my community. I wasn't in Toronto at the time of the Summit, and really had no desire to be, but I'm certainly concerned and the 'Testimonial Hearing' completely captured my attention. And so I created a rally poster for myself (might as well go all the way if I'm going, right?), grabbed my camera, threw it into my bike basket and off I went. 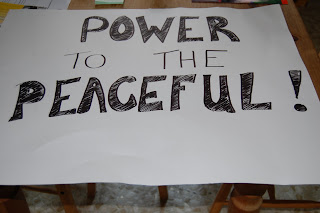 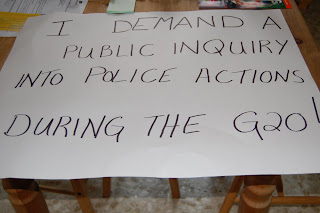 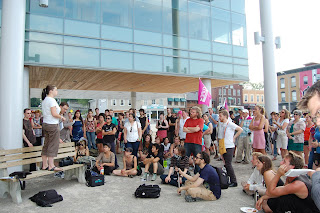 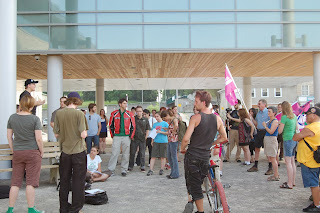 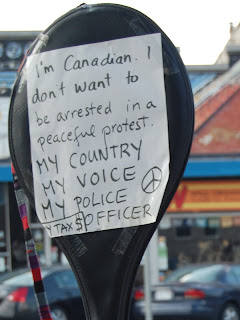 Testimonial reading is very effective. To bear witness to an other's story while they tell it in the flesh is very provocative. For the safety of the individuals who chose to share their G20 demonstration experiences, I have decided not to post their pictures. Instead I've decided to post pictures of the crowd as a whole. The Rally got a decent turn out of about 70 or so people.  I've picked out themes that came up between their stories and I'd like to share a few with you. 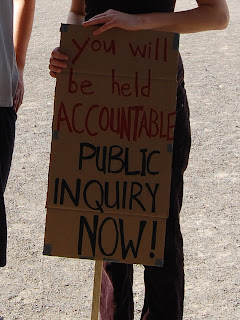 I understand that the police worked very hard to separate 'the group'. I heard about the police dividing the demonstrators during their march, sending up flares to spook people then inserting themselves into the crowd, forcing it apart. One half of the demonstrators were forced to continue on the route they were travelling, while the other half was forced off route onto a side street. I also heard about micro groups, small crowds of friends, being separated through physical force by the police. Plains clothes cops grabbing random people and dragging them behind the riot police lines...their friends left behind, often angered and worried about the treatment of said friend. I believe this is done to weaken the strength found in groups, to invoke fear...a psychological tactic used to break people and take the fight out of them. Of course, if one did choose to fight back they were arrested and detained and so, for some, the protest might have seemed like a lose-lose situation...which I'm sure was the plan all along.
I also heard in the stories that physical force and verbal abuse was the norm, racial profiling was highly prevalent and that the homeless were harassed constantly; though I doubt that these sort of actions are contained to a single weekend. Rather I think they're ongoing systemic issues that deserve to be brought into the light. I also heard that detainees were crammed into cells and denied their phone call; that water and food were terribly scarce. I don't like to think that any of this is the norm, and yet I fear it is.

McGuinty has said no to a public inquiry and insists that the government will figure out the lesson to be learned from the whole situation. I think he needs to hear it from the people on the ground. I'll leave you with this thought from one of my fellow protesters: 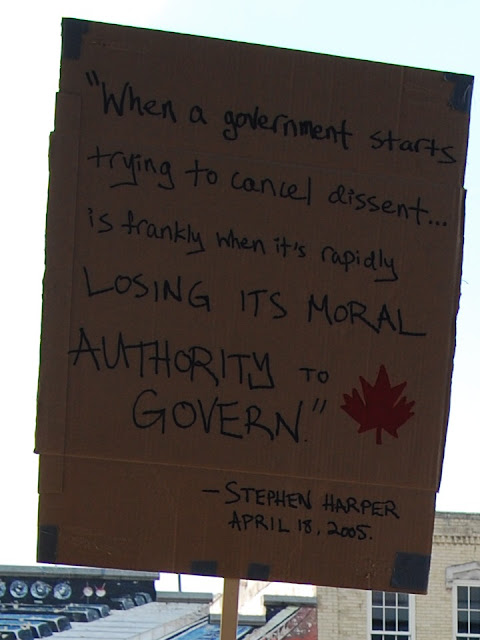