Slutwalk Guelph. The name is enough to grab attention in itself and for good reason...it gets people talking about a subject that gets not nearly as much attention as it should: rape culture. Slutwalk's are a new phenomenon founded and launched by Sonya Barnett and Heather Jarvis in Toronto in 2011. A Slutwalk is a form of protest, created to support victims of sexual violence and to collectively challenge the mindsets and stereotypes surrounding sexual assault and victim blaming. The rallies began when Constable Michael Sanguinetti, a Toronto Police officer who spoke at York University while Heather and Sonya attended, suggested that to remain safe, "women should avoid dressing like sluts." This understandably pissed Heather and Sonya right off, as it should every woman (certainly me - SHAME on you, Mr. Sanguinetti!) , and, consequently, participants protest against explaining or excusing rape by referring to any aspect of a woman's appearance. Sexual assault and rape are never the victims fault, no matter what they wear, no matter if one's been drinking or doing drugs...rape can not and will not occur unless there is an intent to rape on behalf of the rapist. Period.

Starting at Marianne's Park at 1pm, an amazing crowd gathered to march collectively up Gordon St. to City Hall.
As we lined the sidewalk, approximately 150 strong, we brandished our signs and loudly chanted:

Who's bodies?
Our bodies!
Who's choice?
Our choice!

No justice, no peace, until we stop sexist police!

I shake my ass to smash the state, not to make you salivate!

However we dress, wherever we go, yes means yes and no means no!

Consent
Get it?
We got it!
Good! 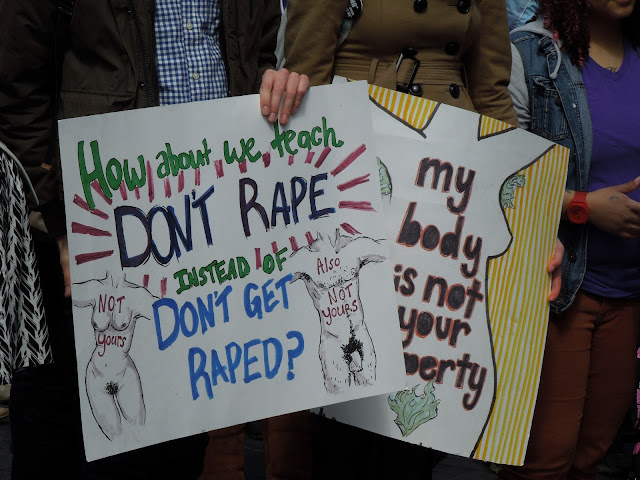 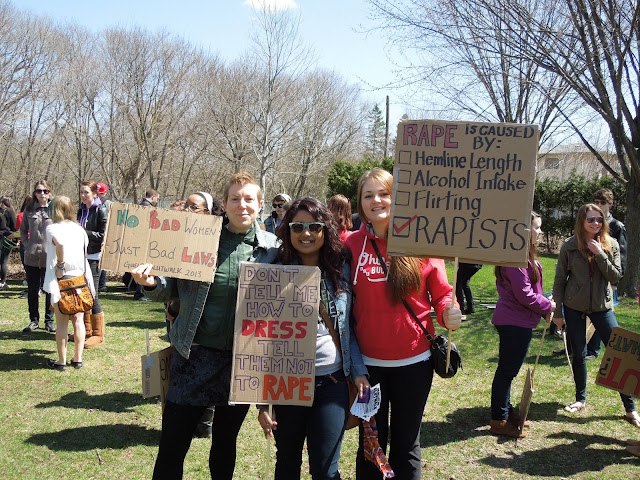 The organizers, Elsa Bagg and Kara Carder, planned a bang up line up to speak at City Hall once we arrived. Truth Is performed first and was able to move me at the cellular level with her spoken word poetry. This woman broke my heart and simultaneously gave it wings. Here's a sample from the first poem she recited:

It is my fault
because it was my lungs
that were too scared to muster up a loud enough
NO
so that your soul would listen
Tell me you're sorry again for the first time.
Let your lies roll off your tongue like thunder.
Speak them at me. 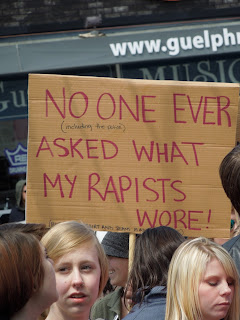 Rose, from the one woman show The Rose Project, shared her story of sexual assault on the Guelph University campus and the shame she experienced due to her interactions with Guelph Police who questioned HER actions (what she was wearing, why she didn't fight harder, did she say 'no'?) and never took action to pursue the men who assaulted her.

I was especially moved by a man (I am so sorry that I didn't take a note pad and don't remember your name!) who was speaking on behalf of Guelph Women's Crisis Center who advocated for men to join the movement to deconstruct rape culture. Sexual assault and abuse towards women is not just a problem related to women, after all, it is a human issue. He told us the story of a single mom he knows who is raising her son to consciously seek consent....that is she is teaching her son to enter the space of others in a consensual way. "May I give you a hug?" "Can I hold you in my lap and snuggle before bed?" The way she frames the dialogue between her and her son is key. When it comes to 'success' and 'being a man', boys are often taught to 'take it' or 'go for it', to be assertive. But assertiveness, left unchecked and without moral boundaries can turn into aggressiveness, entitlement, and a graceless wielding of power. So rather than perpetuate the assertive mind frame in her son, this woman wisely leads by example in teaching her child to approach other people with consent and respect for their personal boundaries. It can be that simple....unfamiliar maybe, and takes getting used to via vigilant commitment...but simple.

Another shift that can strongly contribute to the abolishment of rape culture is the shifting of language. Heather Jarvis, co-founder of the original Slutwalk in Toronto, talked about the importance of reclaiming language such as 'slut', 'cunt', 'bitch', and 'queer'. These dehumanizing words are capable of great damage and it is the motive behind the language that cuts. Rather than wonder what one did in order to be called any one of these terms, we are asked to challenge the one who wields the language. If you had to follow up the phrase "You are a slut (bitch, cunt, queer...)" with "because...", would you still say it? Here's an excellent TEDx Toronto talk featuring Heather and Sonya Barnett discussing the power of dehumanizing language: http://www.tedxtoronto.com/talks/tedxtoronto-2012-talk-heather-jarvis-sonya-jf-barnett/


Why am I so passionate about this walk and the important message it's organized around? Unfortunately I am in the rankings with the other 25% of North American women who are raped, in that 18 years ago I was sodomized by a man at a party while another man held me down. And I didn't report it to police. It's not an easy thing to admit. Yes, I was drinking. Yes, I was wearing a skirt. No, I didn't ask for it. I'd never have been raped if not for the intent of my rapists, and that is that, folks. It is never the victims fault...NEVER. It took me a long, long time to get here...to a place of self forgiveness for that awful, horrible night. And, like Heather said, my intellect knows I didn't ask for it, but sometimes my emotions and my body forget and I still wish I'd fought harder, screamed for help, done something, anything different. I hold myself responsible for my actions, but my actions on that fated day in no way invited those men to rape me. Yes means yes and no means no; and, though I did not say no, I didn't say yes, either.

And so, in an act of solidarity with like minded others who hold and respect each other's stories, I walked for all of those who weren't there because it's too painful, vulnerable or dangerous to think about, to relive, or to speak out about their experiences of sexual assault and rape. And I commend those of you who were able to join the rally, who chanted and raised your fists to the sky, demanding an awareness and a shift of consciousness from a society that, sadly, unknowingly, perpetuates a culture of rape. From my heart to your heart, thank you.

To the Slutwalk Guelph organizers and volunteers, many, many thanks! Your commitment and hard work is appreciated! For those in attendance, thank you for showing up and for walking the beauty way to co-create a community that values and fosters love among its citizens and speaks up for the abolishment of rape culture in society. Let's hope future generations benefit from our efforts! See you next year!

Posted by Kimberly at 1:34 PM No comments: